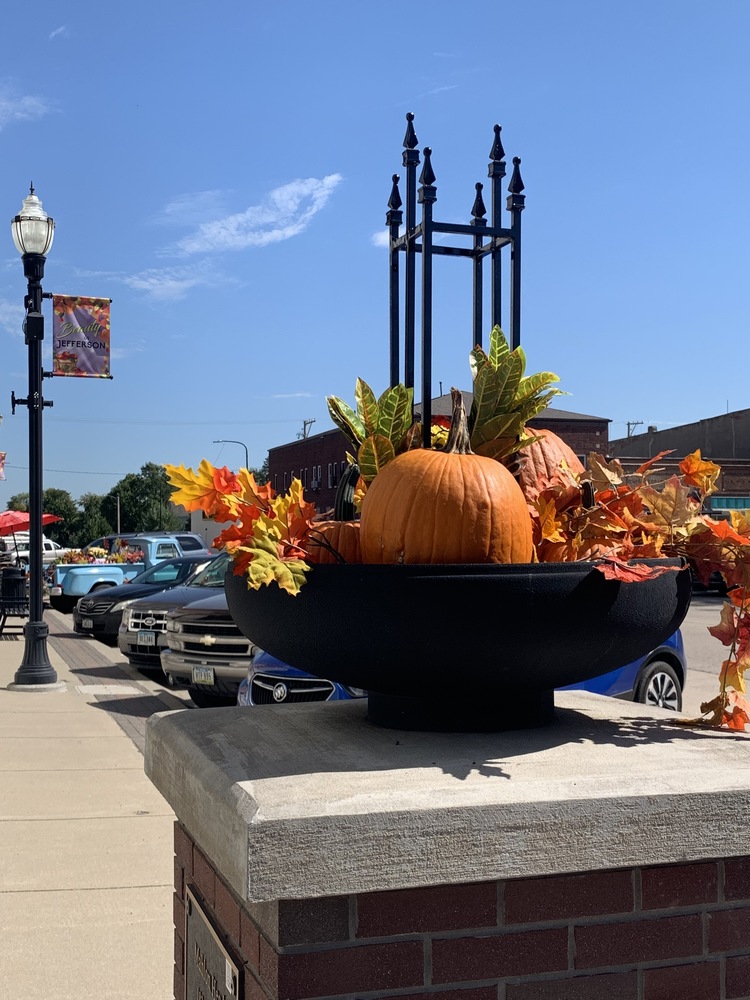 Have you been downtown and noticed the new pillars installed in the planters located around the square? These beautiful locally created decorative supports are the result of a unique partnership between Jefferson Matters Main Street Design Team and local students!

The Design Team continues to beautify the downtown by filling the planters every season. In the beginning, they did not have the tall center supports in the planters and realized they needed something to anchor the fresh evergreen, berries, and pinecones for the winter season - a permanent center support that was also decorative.

That is when they put their heads together and went to Roger Aegerter to explain their idea. Roger built a prototype and Mike Palmer, City Administrator, put the Design Team in contact with Greene County High School to see if they could make this happen.

Josh made this project part of his students’ curriculum having them design the plans for the final product. The Design Team wanted the finials on the decorative supports to match the ones on the fence at Thomas Jefferson Gardens. Josh was able to locate a company from whom he ordered the finials which were then attached to the supports.

Welding students from Greene County High School (CGHS) and the Career Academy ordered the steel, cut the steel, and welded the pillars. Iowa Central instructor Kyle Harding assisted Josh Carlson with completing this part of the process. Once the pillars were ready, Kyle took the pillars to New Way where he worked and had the pillars painted. Kyle then delivered them to City Hall where they waited patiently for the summer flowers in the planters to be removed.

Once the planters were totally clean this fall, the next step was to have 2012 GCHS graduate Kurtis Rice weld the pillars into the planters. Kurtis is a shining example of the results of an education in the local high school’s Career and Technical Education strand. Kurtis took Dan Benitz’s welding class and placed first at state in welding at SkillsUSA and then placed third at nationals while still in high school. Kurtis attended Iowa Central Community College and once again won at state for welding and competed at nationals. Kurtis and his dad, Kelly Rice, run Welding Innovations northwest of Jefferson.

Kurtis used his portable welder to permanently install the decorative supports into the planters, which were immediately filled with fall silk flowers, pumpkins, and gourds, thanks to the Design Team and many community volunteers.

Main Street Iowa, a program of the Iowa Economic Development Authority, encourages their teams to get local youth involved in what they do. This project is a great example of how that can be successful and benefit both our local community and visitors who come to Jefferson. Our downtown looks so nice because of projects like this and now a lot of our current and former students can take pride in knowing they were key in making the pillar centerpieces happen.