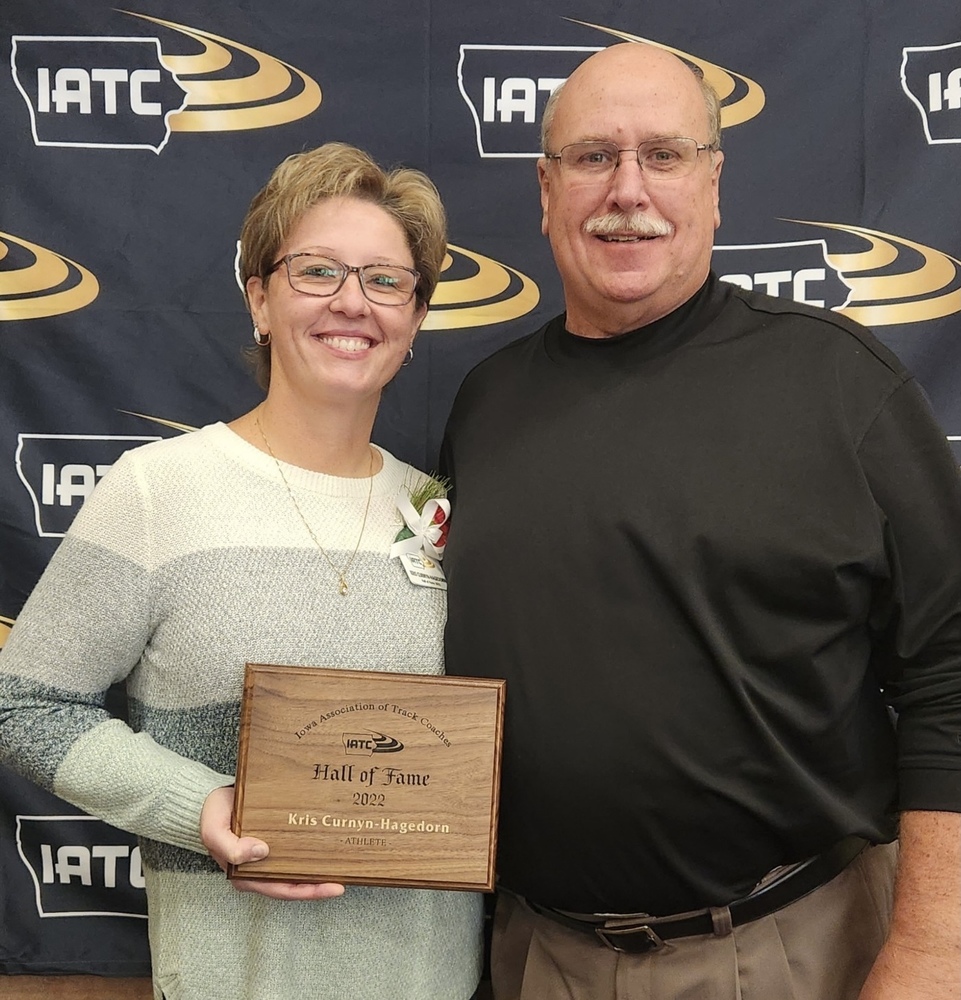 If you happen to be a person who won multiple state titles plus a Drake Relays title in high school; won Big XII titles, set Big XII records, and earned All American honors in college, what else is there really to say about your outstanding career?

Well, if you are Kris Curnyn Hagedorn, a 1994 graduate of Jefferson-Scranton High School and a 1999 graduate of Iowa State, there is plenty. She was an outstanding student and a very talented four-sport athlete.

Like many junior high kids, Kris went out for track in seventh grade because most of her friends were, too. She knew track events weren’t going to be her specialty, so she thought she would give field events a try and joined the throws group. She not only enjoyed the camaraderie of her teammates, she loved the competition.

Qualifying for state in the discus, as a freshman and not placing, didn’t cut it for Kris. She won as a sophomore, but that didn’t cut it either. She not only wanted to win, but also wanted to have the best throw across all classes. She did just that both her junior and senior years.

She also won Drake Relays gold in the Discus and silver in the Shot and she helped her team win four conference titles, four District titles, and a first-ever State team title for her school while winning 31 of 34 Discus competitions along the way.

At Iowa State, she immediately became a very important part of the Cyclone’s success. Kris qualified to the NCAA championships seven times and earned All-American honors in the Weight Throw and the Hammer Throw.

She was a Big XII champion and Big XII record holder in the Discus, a four-time Iowa State Scholar Athlete award winner and over 20 years since graduating, she is still on ISU’s Indoor All Time Top Ten lists in the Shot Put and Weight Throw Indoors and the Shot Put, Discus and Hammer Throw outdoors.

Kris works at Principal in Des Moines as a Product Manager. She and her husband Josh, also a Big XII champion and All-American thrower at Iowa State, reside in Adel. Son Joey is a college freshman at ISU and Daughter Lauren is a high school freshman at ADM.

Kris is the daughter of John and Alana Curnyn who reside in Jefferson.

Pictured:  Kris Curnyn-Hagedorn and her former throws Coach Tim Buenz. Coach Buenz got Kris started on the right track from the very beginning and helped her to excel in the shot and discus. They started working together when Kris was in the eighth grade. Tim has enjoyed following her throughout her career, and they remain friends today.